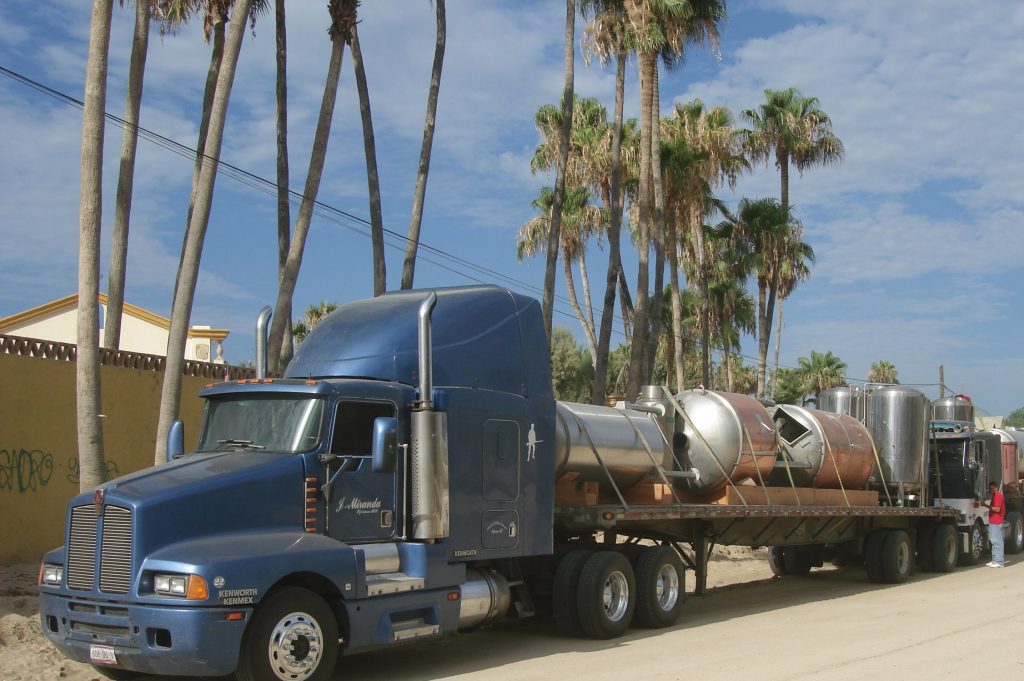 Jordan and his father Charlie were on a mission to take the initial steps toward realizing their shared vision of building the first craft brewery on the Baja Peninsula. Job one in bringing that ambitious dream to fruition was finding just the right spot. As fate would have it, Charlie happened to be driving around downtown San Jose del Cabo when the old bakery caught his eye. He immediately saw the potential of the location and decided to rent it on the spot. The space was enormous, perhaps a bit too large for a craft brewery, but perfect for a brewery and a restaurant. Just like that, the concept of the cantina began to take shape. They soon moved in and began planning for a lengthy renovation. Like most fixer-uppers, the project proved to be more time consuming than even they had initially anticipated. The area where the current outdoor seating is located, used to be something of a local dumping ground. When all was said and done, it took 20 truckloads to cart away enough trash to clear the area. The interior of the bakery wasn’t much better. Years of disuse had not been kind to the facility and it took a lot of sweat and elbow grease before some semblance of a productive space began to emerge from beneath the layers of neglect. Rob, along with his friend who came down to help, set up a carpentry shop on site where the two built the massive wooden bar, the tables, and the chairs. The almost magical transformation of the raw wood into the beautifully finished pieces was an inspiration to behold. Jordan still remembers walking in and witnessing them applying the finishing touches and the sense of wonder he felt at what they had accomplished with their own hands. 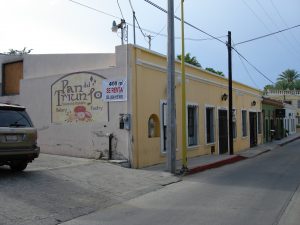 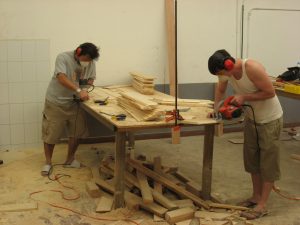 While Rob worked on the restaurant, Jordan and Charlie kept busy crafting the business plan and designing their brand name, logos and labels. They wanted a local symbol to represent the brewery, something iconic that would speak to the spirit of this desolately beautiful land and the persevering souls who inhabit it. In Los Cabos there is a population of semi-wild burros that roam the countryside. These surefooted, steadfast and highly intelligent creatures are the descendants of the ones the Spanish used to first establish a presence on the peninsula some 300 years ago. Their hardy attributes served these animals well in the harsh and unforgiving climate of the cape and they proved indispensable to the intrepid missionaries and explorers. To Jordan and Charlie, the humble and hard-working donkey seemed like the perfect symbol for an upstart, local brewery. 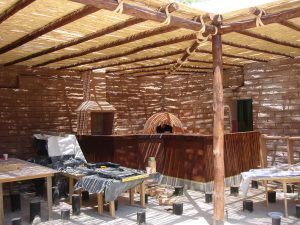 Odell with the Assist

It was an exhilarating time but also quite stressful, as the founders had to go out and secure investment capital. It took the better part of a year to gather together like-minded visionaries who saw the potential of a Mexican craft brewery. It was a task made easier by the partners’ unbridled enthusiasm and their inspiring vision for the future. Jordan and Charlie’s primary focus, however, remained setting up the brewing operations and they were now scouring the US, Canada and Mexico in search of used brewing equipment. After weeks of frustration, it was none other than Doug Odell from the famous Odell Brewing Company, who rode to the rescue, helping them locate brewing equipment and later mentoring and collaborating with Jordan. That the young enterprise would receive help from an icon of craft brewing at precisely the moment they needed it most, seemed like yet another timely intervention in their favor by the generous beer gods. And to think it all started when Charlie cold-called Doug on a whim and struck up an immediate friendship that would endure throughout the early years of the Baja brewery. It’s yet another testament to the generosity of the craft brewing community at large, that an established player like Doug Odell would lend a hand at such a critical point in the young brewery’s formation. 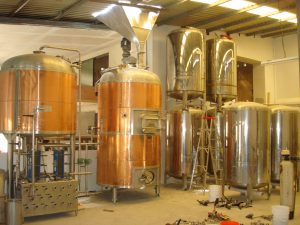 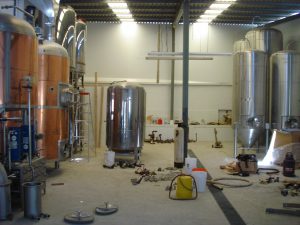 Doug helped them locate some equipment that was being sold by the Laguna Beach Brewing Company in California. They were going out of business and were selling off the equipment to recoup some of their initial investment. Upon hearing the good news, Jordan immediately flew up to inspect the equipment and agreed to buy it for $100,000 on the spot. He didn´t yet have the funds, so he negotiated a down payment with the full amount due within 45 days. After hastily securing more investors, he flew back, on the very last possible day and paid the balance all in cash (payment in future beers being out of the question). It was a princely sum and more money than a young Jordan had ever seen. Paying for the equipment, however, was just the beginning. The old Laguna Beach Brewing Company was housed in a historic landmark, so they could not touch the walls. They had to hire a local company to tear off the top of the building in order for a crane to pull the equipment out through hole in the roof. Once the equipment was carefully extricated, it was shipped the 1,100 miles down to Los Cabos on three flatbed trucks. It took them two weeks (some of it spent held up at the border) to transport the massive equipment over the sometimes-treacherous roads of Baja.

Now that all the pieces were finally coming together it was high time Jordan made it official. After a lifetime of dabbling, he decided to become an honest-to-goodness, Brewmeister and went back to school at the American Brewers Guild. He signed up for online courses and then flew up to Vermont to take certain classes and pass his tests. Due to the timing of the coursework, many long hours of study occurred smack dab in the middle of hurricane season. Jordan fondly recalls one harrowing occasion when his Dad and sister were both hunkered down at his apartment during a hurricane. The lights kept going on and off and Jordan, out of sheer necessity, would study in between black outs. Short bursts of productivity followed by terrifying intervals of waiting and listening to the cataclysm unfolding outside. As it turned out, this would be only the first of many encounters Jordan would face with these destructive and often deadly phenomena that periodically ravage the peninsula. After all the equipment was painstakingly assembled and Jordan graduated with his shiny new brew master credentials, he hired Bart, the brewer from Laguna Beach Brewing Company. Bart flew down and helped Jordan start the brewing process. It was a great decision as Bart was intimately familiar with the equipment, as he had been making beer with it for years. 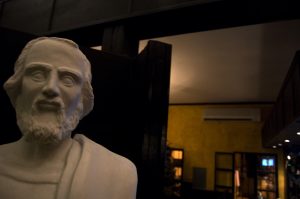 During construction, many fond stories were made. One such tale, well worth the retelling, is the creation of the life-size statue of San Lucas (the patron saint of brewers) that still resides in the Cantina. It was created by an itinerate artist named Vassy and it took him the better part of a year to finish. Vassy, a young drifter from Mexico City, moved into the construction site and lived there, full time, while he worked. He toiled all night and slept during the day in a shack he had fashioned from scrap. A true starving artist, he worked for food, rent and beer (not always in that order). He was an enigmatic character who kept an eye on the place at night and was always there to lend a hand. When his magnum opus was finally completed, Vassy vanished as suddenly as he had appeared. Off to the next town, no doubt, where his eclectic skillset could be put to good use.

After a few months working out the kinks in the equipment and more than a few late-night sampling sessions, the brewery was ready for business at last. The Baja Brewing Company opened a few months prior to the grand opening of the restaurant. At first, they only brewed four styles of beer, which were the brown ale (later named Charlie Brown), The award-winning blonde ale, the complex, yet highlydrinkable black ale, and last but not least, the famous red ale. The cantina was a smashing success. They had a great first year that exceeded their expectations and locals and tourists alike flocked to Jordan, Charlie and Rob’s cantina and brewery to partake of the new and flavorful craft offerings that were locally brewed with pride at the very first brewery in Baja California Sur.